The job of the football mascot has never been an easy one. There’s the constant attentions of the younger fans to deal with, as well as the decidedly crueller attentions of travelling supporters. In Brazil, there’s the added hardship of having to wear a heavy plush costume in the humid, rainforest heat. Sounds like hard work to us. 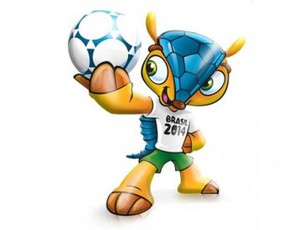 Luckily, the mascot for the FIFA World Cup 2014 in Brazil is pretty thick-skinned… Meet Fuleco, the three-banded armadillo who’ll be cheering the players on from the sidelines in this summer’s tournament. Three-banded armadillos are listed as a vulnerable species on the IUCN Red List, so this could quite possibly be one of your last chances to see this elusive creature in its natural habitat.

The tournament’s host nation are, of course, hoping this will not be the case, with the selection of the animal in question intended as a reminder to the watching world of the value of South America’s beleaguered wildlife. Indeed, the mascot’s name itself seeks to highlight environmental concerns; whilst to English ears it might sound like the name of some giant fossil fuel-peddling corporation, it’s actually a portmanteau of the Brazilian words for football (Futebol – Ful) and ecology (Ecologia – Eco). Whilst the Brazilians will be entering this summer’s tournament as the bookies’ favourites to emerge as champions, there’s also a clearly another agenda running parallel to footballing ambitions here: raising the important environmental issues the country is facing. With over 90% of Brazilians stating their belief in an eco-friendly nation, the World Cup hosts are taking this good example and transmitting it to football fans around the globe – most importantly, children – through their armadillo mascot.

How will Fuleco go down with the fans?

The early signs are promising for Fuleco’s creators, as far as the international reception of their mascot is concerned. Research has shown that the character scores an average of 7.2 out of 10 for appeal, with football fans who associate his name with ‘Brazil’, ‘Nature’, ‘Friendly’ and ‘Passion for Football’.

A good comparison with previous mascots?

For one thing, Fuleco seems certain to hold a far greater appeal than Great Britain’s Olympic mascots for 2012, Wenlock and Mandeville, who were described by one commentator as looking like a “drunken one-night stand between a Teletubby and a Dalek”. In terms of previous World Cup mascots, Fuleco will be competing with greats such as Footix, France’s red and blue rooster from ’98 and – pub quizzers take note – World Cup Willie, the Lion who cheered England to glory in 1966.